Today is July 14th, a not insignificant date in the French calendar as it marks the anniversary of the Storming of the Bastille, an event that did as much for Gillette Razors as Easter did for 4 inch nails. As you can imagine, the local peasants still enjoy celebrating their ancestors ‘revolting’ act by barbequing some wildlife and swilling down the local hooch. But this year our nearby neighbours have had 2 days to get swallied within one week, as we also had the bonus of La Tour de France passing right by our door a couple of days ago. Now I have to say I am not big on cycling but, as you may well be aware, I am big on partying. So an occasion like this was not one to be missed as we once more dusted off the sheep trailer and invited all our friends along to a street party – in the middle of the road. Not one but four shoulders of lamb found their way into the oven for 18 hours and then subsequently onto the bbq prior to our sit down, once the main roads had been closed to allow 200 cyclists to pass. In all, said lamb fed 29 guests as well as one fat policeman, as we revelled for a good few hours of flag waving on the side of the highway, buoyed on by copious amounts of red wine. However, forget Chris Frome or Mark Cav, the star of this year’s show was very much the one-and-only Daisy Death-wish who made a guest appearance, complete with polka dot jersey. Installed in a 6 foot square pen on the grass verge, the bemused creature stamped her foot at passers by, most of whom stopped to take her photograph, including the official La Tour journalist. Thankfully there was plenty of bread and water melon on offer so she didn’t do too badly out of the deal although, when the sun came out, she did look rather embarrassed in her yellow hat with holes cut out for her ears! 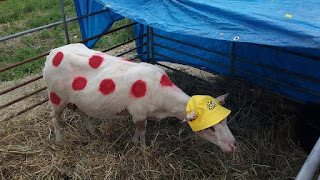 On the subject of sheep, this year we have had almost a perfect summer for them, as we seem to get heavy rain storms every few days and the grass is growing so fast they can barely keep up. Sadly so are the thistles which are bidding for a takeover since the wheel broke on the topper. I think I mentioned we had a new addition of a ram last month? He has now been named Rafa – after the 10 times French Open tennis champion - and is settling in nicely in his own field awaiting his ‘induction’ with the females in September. I am not quite sure what he will make of one wearing a red polka dot dress, but I doubt Daisy will be slow in chatting him up when the big day comes!
Other news this month is that we have now completed the project in Fife, or thought we had. Unfortunately, a few minutes before the valuer arrived to inform us of what little profit my hard work had earned, a torrent of water started pouring in through the kitchen ceiling! Eventually the leak was pinpointed to a rotten section in the dormer window, so we now have scaffolding up, awaiting a joiner to take out the window and replace the offending piece of wood, and praying for no more rain. Oh well, back to the drawing board. We still managed a small celebration of our efforts, as we at last breathed some life back into a building that had sat empty for 15 years, with some loud music and singing. Think we might need to sell-up and move on now, though, as the neighbours were none too impressed with our shenanigans at 2am!
Every time I consider I am getting too old for this hard work, another un-missable opportunity presents itself. This time a pair of derelict fishermen’s cottages on the edge of the Firth have caught my eye, so watch this space. Not sure where I will find the time, money or energy to restore them back their former glory; I may have to dig very deep on this one.
Usually mid-summer, and July in particular, is reserved for some down time to spend with visitors so it has been nice to have both my sons here in France over the past few weeks, along with their mates. The pool and pizza oven have been put through their paces, as has the beer fridge. In a clever piece of marketing, one brand of beer is celebrating its 70th birthday by printing a different year of its existence on the cap of each bottle. To start with this just whiled away a few seconds of attention to the lads but, as the collection grew, it rapidly developed into an obsession. Soon they were back at the store, buying more pallets of the stuff so they could complete the entire set – exactly the course of action that the manufacturers would be looking to incite. Sadly the collection is still 3 numbers short, and the guests have all left now. So, it is up to me to keep the search going until we find 1970, 1984 and 2001. It’s a dirty job, but someone has to do it!
If I wasn’t such a cynical old bugger, I might suggest that Kronenbourg never actually printed those ones at all.  I can but check, though!