Late late late again. Where does the time evaporate to?
This month's excuse is that we were at the time travelling to England from France for my niece’s wedding in Rock church and, coupled with an endless list of problems around our building project in Scotland, things all got a wee bit fuzzy.
Anyway, the wedding was superb and went off without a hitch, culminating in a great party at Hopleys Park in Bewdley. I would like to wish Adele and Ade, a long and happy life together. It was nice to see a few familiar faces around the village including Sheila Nott who was ‘on duty’ during the service, and the editor who furnished me with a pint in the local! 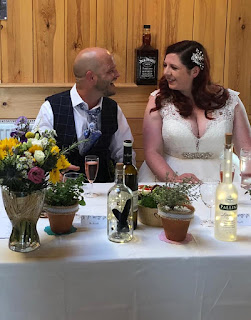 I had mentioned earlier in the year that we were planning to head to Japan for the Rugby World Cup this month. Unfortunately the above mentioned building project urgently required my presence here in Scotland, dealing with some quite technically challenging issues spurred on by constant reform of building regulations and technology, so we cancelled the trip last minute. We now have a floor, 4 walls and a ceiling on the downstairs area and, as I speak, the upper extension is underway and awaiting the arrival of a rather expensive 4 metre wide window. This in itself has highlighted yet another problem as it is dubious whether we can fit the panels down the alleyway to our seafront position. With a street too narrow to take a crane, the latest suggestion is that we deliver it by boat and carry it up the rocky beach. Not an easy thing to schedule during the windy season! During my 3 weeks here I have walked 240 kilometres, climbed 800 floors, done 46 hours of hard labour and burned 75,000 calories. This information I gleaned from the Fitbit (or in my case, Fatbit!) device that Wendy bought me for my birthday which has the sole purpose of shaming me out of being a lazy B as I enter my later years. It also advises me of how much sleep I have had, or in this instance, not, as I constantly wake in a cold sweat at 3am imagining the waves and rainwater cascading into our new unfinished bedroom!
On the subject of wind, I think the postponement of our trip to the Far East worked out rather fortuitously, as it would have coincided with the arrival of typhoon Haggis, which delivered gusts of up to 150mph around Tokyo’s stadia. Thankfully not too many tourists suffered and a plucky performance by the host nations on the pitch that weekend put paid to my wife’s national team, Scotland, in quite dramatic fashion, leaving only hot air from their coach in its wake! As yet, I am unaware of the fate of my own team, England, who will have either held aloft the Webb Ellis trophy, or predictably crashed and burned in their chariot!
Also, by the time this gets to print we will once more be back in France for a short while, tidying up before winter. During that time Halloween will have been and gone and, perhaps, things around the ‘B-word’ may have settled down a tad. Or perhaps not.
As we plan to return to Scotland in late November, it is with some trepidation that we suspect we will be met at the ‘hard’ border with vehement hostility, and have our wine stocks and dogs confiscated. Then, of course, the trip North will inevitably be hampered again at Hadrian’s Wall, as Nicola Sturgeon bullies the Scottish public into a new bid for Independence, and the country’s economy nose-dives into whisky-enriched oblivion!
Our final news this month is even more exciting. After more years than she cares to admit working in the computer industry, my wife Wendy will be taking well-earned retirement at the end of this week. This will, of course, leave us in a hopeless financial predicament but at least we will be able to share the worry together! Inevitability it will incur a few changes ahead, but we are both looking forward to taking more time to travel once we have everything settled down and the roof back on.
See you all on the road!
Posted by andyfrazier at 01:42