Today we left the Bay of Plenty and its troubles behind and headed down to Napier. A pretty drive over the mountains took us via Lake Taupo, a place I remember vividly, where we stopped for a dip in the hot springs. Napier is sensational town. It was destroyed by an earthquake in 1931 and rebuilt using art deco architecture. The net result was like walking back into Chicago in the 30’s and I half expected to see Al Capone come round the corner in a Model T Ford! The town revelled in the style too, with many shops selling classic clothing and hats, while new buildings were developed in the same style.
Our ensuing drive, the next day, took us down through the glorious Wiarapa valley, the home of New Zealand’s sheep industry. I was quite astounded by the lack of them though, compared to my last tour here. It seems that the sheep population has declined from 70 down to just over 40 million over the last 3 years. Much of the ground is now farmed by the diary industry, with some of the better ground turning to grape and wine production. Such a steep decline has, of course, now pushed up the price of lamb as demand outweighs supply. Maybe they have been a little too hasty?
As the valley opened out, we made a quick stop at the legendary TUI brewery which, although still brewing fine beer, is now set up for tourists. I dined on Paua fritters for lunch, the first time I had tried them and hopefully the last, they were ghastly!
Our journey South ended in the capital city of Wellington, one of the world’s nicest cities. A great choice of hotel from my better half found us on the tenth floor overlooking the beautiful harbour which drifted into bright twinkling lights as the warm evening on our balcony wore on. I tried my best to capture the scene on camera but, as is often the case with beauty, the only way to truly capture it was in my own memory. Wellington is packed with things to do, but sadly time was against us and all we could squeeze in was a whistle stop tour around the museum of culture. It is very hard to get an understanding of how the Moari tribes once ruled these lands with their ritual ways before the white man took it from them, cornering the remaining few tribes into ghetto’s and slum suburbs. On TV, the ceremonial dance of the HAKA, done by the All Black team at the start of each rugby game, may look as comical as it does barbaric, but when witnessed first hand, it is plain to see its links with the inner feelings of the Maori race. Repressed yet content, the fierce ritual represents a proud nation, living with sacrifices in the name of harmony.
Sacrifice is what came next, as once again we flew to Auckland for more rugby in Eden Park. This time the sacrifice was from the Welsh, when one of their main players got sent off by a dubious decision from the referee, leaving them a man short and somewhat helpless against a gallant, if poor, French side who booked their slot in Rugby World Cup final. There will be no welcome in the hillside for this referee, as the final whistle sounded to a dejected roar from the team and the whole Welsh nation, many of who were reduced to tears, many more who will remain angry for a good number of years. With my French beret on, I could only utter the words c’est la via, c’est la sport, to anyone wearing a dragon or a leek. 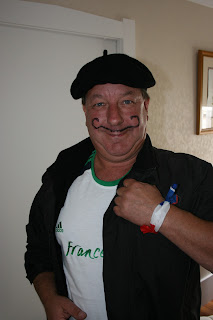 As I write, the final game looms against the All Blacks, and there will only be one winner there. Without being too presumptuous though, New Zealand do deserve emerge as champions, purely due to the spectacular way in which this Rugby World cup has been organised and to the Nation, (to a man) for their welcoming attitudes.
We now find ourselves in the Bay of Islands, 4 hours North of Auckland in what is essentially a tropical area, amongst palms and silver ferns. We have decanted into a campervan which rocks erratically as we peer out of our window over the bay through rain and high winds. After two weeks of mostly nice weather, it is a bit of a shame that we cannot get to enjoy all this part of the country has to offer, but it is only Spring down here and the rain is much needed.
One last paddle in the sea before breakfast on the most beautiful beach I have ever been on, watching the sun rise over an idyllic catamaran moored just offshore. This is the stuff of dreams and I believe mine will keep recurring until I come back here, maybe next time for good.
Then its back to Auckland one more time, for a 24 hour journey hemmed into a sticky seat. It’s time to adjust my watch again, except I haven’t worn one in years. Diet starts tomorrow, at lunchtime…or is it breakfast? What day is it again?
Posted by andyfrazier at 23:50