Watcher of the skies

I often find that the TV is much better when watched with the sound turned down. Many people may say the same about me, I couldn’t comment!
Tonight, whilst reading a book, a programme called Winter-watch caught the corner of my eye, if only for some of the stunning cinematography it portrayed of winter scenes and animals rollicking in the snow. I was even tempted to turn the sound up, but that only lasted a few minutes until the irritating trio of modern-day Bill Oddies, who were getting highly enthusiastic about robins and squirrels, did my head in.
Cut to a scene about pigeons, and how wonderful they all are.
That’s great if you are not a farmer, or anyone trying to grow anything from seed, but to me they are nothing more than scavengers – rats with wings, if you will. After pigeon-watch, we get squirrel-watch, bullfinch-watch, fox-watch and of course, deer-watch. Basically just about every predator that exists purely at the expense of the farmers livelihood was being bigged up by these twerps with more enthusiasm than Nigella licking chocolate-spread from a spoon and, because it was all LIVE, people got taken in.
As I had the sound turned down, I didn’t get to hear all the commentary, but I guessing that not once did they mention the damage that pigeons do to crops and buildings, because this might upset a few town-dwelling viewers on whose ratings the BBC relies.
Having waxed on about the nonsense that is shown on BBC’s flagship programme, Countryfile for far too long, I didn’t get too upset by this latest insult to real country folk to hit our screens and returned to my reading, only to be disturbed by an SMS telling about a watch of a different kind. This one was from Aurora-watch, an online website that monitors the phenomenon that is known to all as the Northern Lights. As we are currently residing by the sea in East Scotland, I quickly donned my own winter gear and headed to the beach with my camera. Sadly my trip was fruitless, apart from the odd beam of light in the sky from a local lighthouse. When I returned, one local photographer had posted some most magnificent pictures taken from his garden half an hour earlier, of reds and greens dancing in the sky like magic fairies, and I had missed it because of bloody Winterwatch.
No matter, for the next few hours I camped out on Gullane hill, wrapped up like a green mummy, complete with trusty hip-flask, only to be frozen to near-death watching two hours of bugger-all. Dejectedly, I went to bed at midnight, and woke at 4am, to find that I had missed yet another extravaganza, at 3.55!
Now it is 5.52am and once again I am trying to thaw after a stint in the minus 5 from another futile vigil. For twenty years I have been trying to see those damn lights, and yet again, they have eluded me!
So I suppose my simple question is: why can’t the BBC do Aurora-watch, live from the Scottish coast, so I can record it and watch it from the comfort of a daylight armchair? Send Julia Bloody Bradbury out on a beach in Stornaway to freeze her nipples off in the bitter easterly wind, while I sit and in a t-shirt with a tumbler of malt. I am pretty sure that would make a lot more amazing viewing than that crock of bird-shit that is currently being screened in the pretence that rabbits are cuddly and that everyone in the country loves magpies!
And I could watch it perfectly well with the sound off! 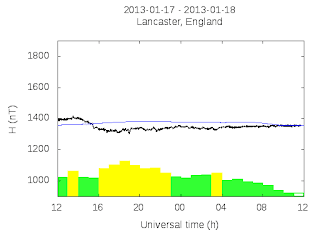